If you are slightly familiar with Catalina Sea Camp, you have most likely heard of our friendly neighborhood bison, but did you know we have a whole host of Toyon Bay Safari Animals? But there are so many other species of animals that call Toyon Bay home. Every week, we welcome circa 200 campers to invade the bay and to have one of the best weeks of their summer. I wanted to take a look at the more permanent residents of the bay. 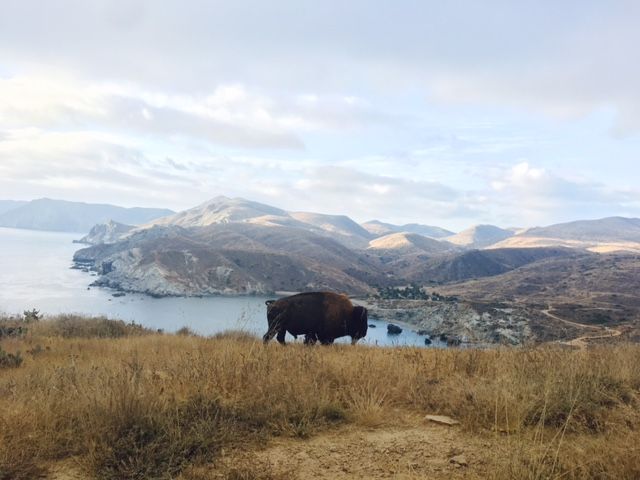 The bison is not native to Catalina Island. In 1924, a filming company decided to take advantage of the beauty of Catalina Island to film the movie “The Vanishing American” there. Then someone on the crew decided that they simply must have bison there in order to enhance the movie. They paid to have these bison shipped over to the island, they filmed the movie, and then they shipped off—without the bison. Now, this massive animal has made the island its home, and sometimes makes trips down to camp to say hello. 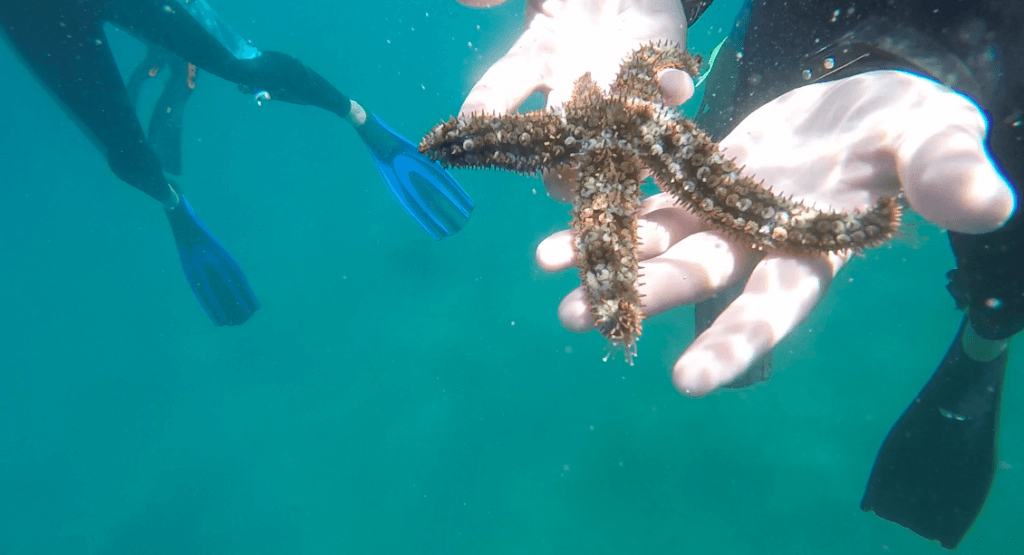 My only encounter with sea stars had been watching the talkative one in Finding Nemo. Then one day, I joined a group of campers on a snorkel, and our instructor dove down and found one. I watched, just as fascinated and intrigued as the 10 and 11 year olds, as our instructor showed us the creature. She later told me that she was worried about the stress level of the sea star, which when risen, can cause their limbs to fall off. A common party trick for sea stars and other aquatic creatures, this defense mechanism can occur without killing the sea star due to its regenerative nature. 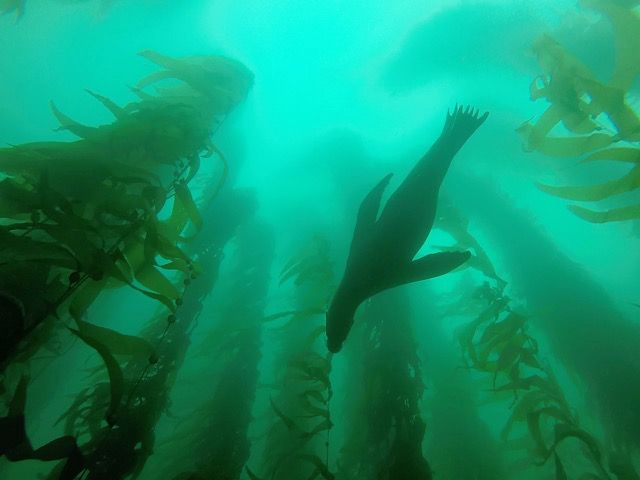 We’ve seen them on scuba diving trips, kayaking trips, blue water boat trips, around our float during the evening hours, and even on our beach a time or two. These babies can grow up to 800 pounds, but can cruise through the water at up to 25 miles per hour. If you have never seen one of these creatures move through the water, go to YouTube and spend some time researching. It’s nothing short of magic. 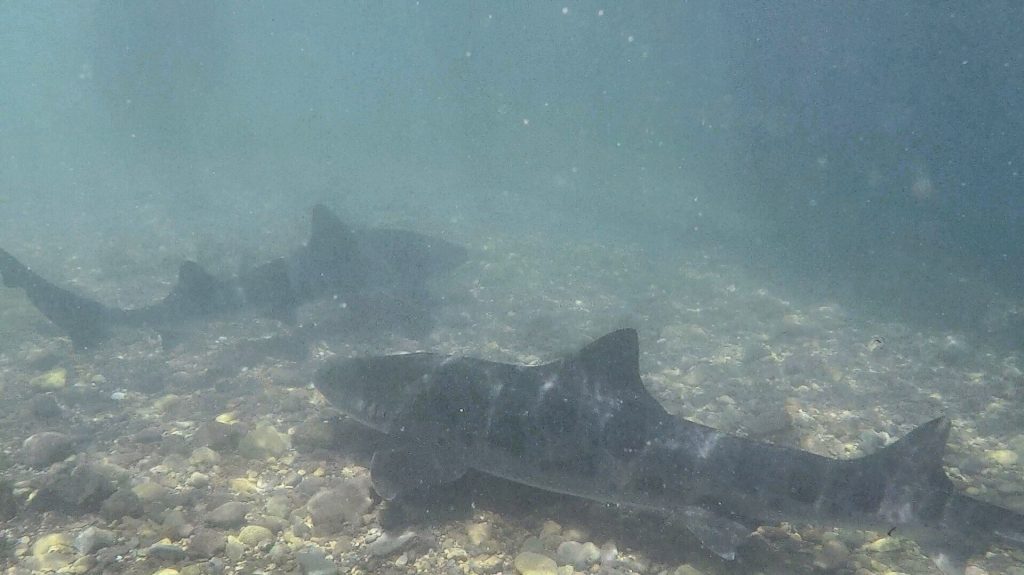 So my boss told me that we would probably see sharks my first time snorkeling here in the bay (also my first time snorkeling ever). As prepared as she made me to face these lurking masses, I still had to force myself to breathe normally when I first saw its shadow about six feet away from me. Since then, I have probably seen a hundred of these guys, and I am now proud to say that I have touched one (in a closely monitored touch tank here in camp, but still). In reality, these sharks are fairly harmless. They are bottom feeders, so their mouths are towards the bottom of the sea floor; meaning bites to humans are difficult and thus uncommon. 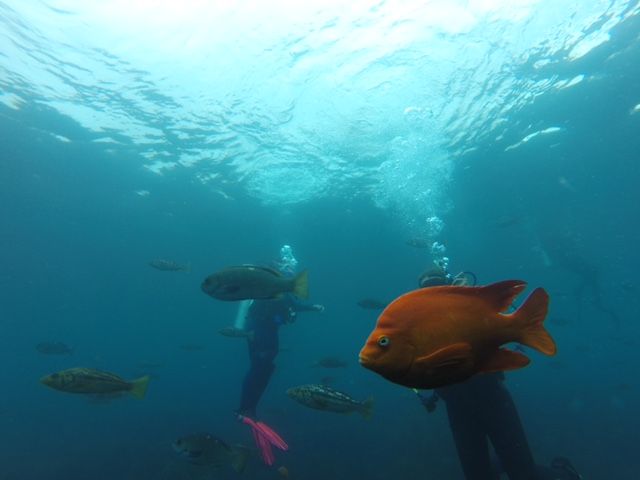 These bright orange little fish are all over our bay. They’re territorial little buggers, but they also make for a beautiful pop of color. Garibaldis are protected in California because they are the state marine fish. Some people say these fish can be trained to do a back flip, but I have only ever heard of one specific garibaldi that can do it.

One of the first nights here I saw a stray cat near me. Nostalgic for my cat at home, I beckoned for it to come close to me and love me. After attempting and failing for longer than I care to admit, the creature ran away, and I realized that the animal I was trying to snuggle was a wild fox. The Catalina Island Fox is threatened specie of fox. It is registered with the Conservancy program on the island, which has been working since 2004 to bring population levels back up to normalcy. In 2004, there were just over 300 foxes on the island. As of 2017, over 2,000 foxes have been reported. Despite the work done and the accomplishments of the initiative, this fox remains threatened, and efforts will not cease.

The most dangerous animals on the island—rock-fetching retrievers. These four pooches belong to our longstanding admin in the bay. You can follow Casi’s life here on her very own Instagram page. All four of them have a very stressful life of unlimited affection and belly rubs, wide-open spaces to frolic and play, and all the rocks to fetch in the ocean that they could ever want. There are no signs that these animals will become endangered anytime soon, but I’ll keep you updated.

These are only a few of the most common fauna here in Toyon Bay, and I, for one, look forward to many more run-ins with these incredible animals.

The Adventure of Science Spotlight

The New Kid – From the Camper Prospective