Whale poop? Why does it matter?

Whales play a major role in maintaining the health of the oceans by acting as ecosystem engineers – in simple terms they modify a habitat by changing the availability of resources for other organisms. 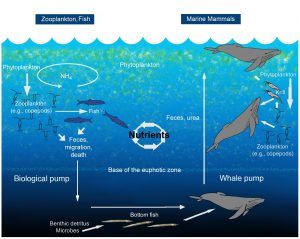 Whales will feed on organisms at different levels of the ocean. While there, they feed on small organism like krill or large organisms like the giant squid. The nutrients that they ingest and process through their body is later released as flocculent fecal plumes. This basically means that whale poop doesn’t sink, but floats. The release of these fecal plumes brings nutrients to the upper layer of the ocean known as the photic zone. Nutrients like nitrogen and phosphorous are not easily found in the photic zone. For that reason we can perceive why it plays an important role.

In the photic zone we find other important organisms known as phytoplankton. These little guys are primary producers – they can make their own food. However, in order for them to accomplish this they need nutrients like nitrogen and phosphorus found in whale poop. Because whales have such a huge appetite they produce a lot of poop that can not only be transported vertically through the world’s oceans but also horizontally due to their migration patterns. This increase in phytoplankton helps feed zooplankton, which feeds fish, and so on straight up the food chain. As plankton grows, they absorb carbon from the atmosphere, once they die – if not eaten – this carbon settles on the sea floor.

This nutrient cycling process was termed the “whale pump” by Joe Roman a conservation biologist at the University of Vermont and James McCarthy a Harvard zoologist. 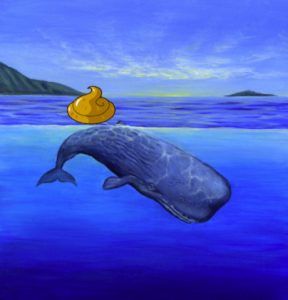 They conducted experiments in the Gulf of Maine’s euphotic zone. They determined that in one year, marine mammals release approximately 23,000 metric tons of nitrogen per year to the surface of the Gulf of Maine. This value would have been much higher two hundred years ago before the start of commercial whaling. It is estimated that world whale populations have declined by 66% – lowest value – over the last few centuries.

Although it may not seem significant, whale poop plays a major role in the world’s oceans.

5 Benefits of Outdoor Education for Children