Happy Halloween From Our Fish Family to Yours 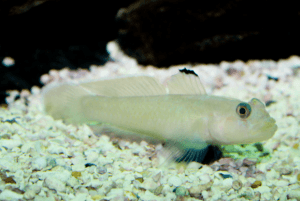 The black eyed goby, often called a ghost goby, is a small Osteichthyes, named for their black eyes which contrast their light beige skin. Reaching only about six or seven inches long as an adult, they eat smaller organisms such as amphipods, mollusks, and crustaceans. They are active during the day, living in sandy areas near rocky intertidal zones, not often below 400 ft. A cool fact about these fish is they are protogynous hermaphrodites! This means that they all start their lives as female, and will eventually change to male. Their reproductive organs are changing!! This happens for many species in the animal kingdom.

The dragon fish (Grammatostomias flagellibarba) is a deep sea Osteichthyes (bony fish), also called the loose jaw or viper fish. Growing up to two feet in length, with a muscular jaw and extremely large sharp teeth, they can hardly close their mouths. Their jaws are “loose,” meaning it is hydrostatically connected to their skeleton, there is no skin behind the jaw which reduces friction and drag. They feed on small fish, crustaceans, and anything they can find in the dark depths of the ocean. One of the coolest adaptations of these dragon fish is their bioluminescence! They have photophores on their underbody as a form of camouflage. Some of the 287 known species have a lure at the end of their mouths, called a barbel, with photophores covering it to attract prey. They also have specialized red photophores underneath their eyes that act as headlights. The long wavelengths of red light do not have enough energy  to reach far depth in the ocean, so most deep sea creatures do not have the ability to see red light. Therefore these fish have headlights that other creatures cannot see!! They are bandits of the deep sea, with night vision while still invisible to those around them. 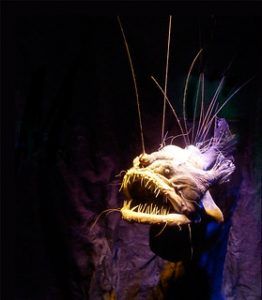 Like the Dragon fish, angler fish are a deep sea Osteichthyes, living at least 6600ft below the surface, where light does not reach. They average two to eight inches long, but some species can grow up to forty inches long! Only females have the lure with bioluminescence photophores at the end of it. They use this to attract prey and males. Males are much smaller than females and do not have a lure so they spend their lives wandering the dark abyss until they find a female, and in a survival effort they will bite and latch onto the body of the female. Over time they will fuse to the female, body and blood line, and obtain all their nutrients from the female. The females will have multiple parasitic males on them, therefore having their genetic material at the ready when it is time to reproduce. Females are often red or translucent to blend in with their dark surroundings, their lure is actually a modified dorsal spine with bacteria at the end of it. The symbiotic relationship with this bacteria produces the light. Once a prey gets close enough to it, the female will catch and swallow it whole! They have a large, fast jaw with sharp teeth, allowing them to eat prey twice their size! Scary and awesome! 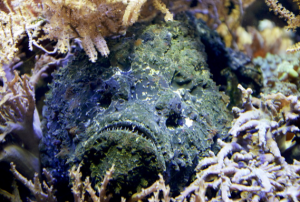 The stonefish is arguable one of the most terrifying Osteichthyes in our world’s oceans because it is the most venomous fish in the world! Quite the creepy halloween creature. Their venom is a defense mechanism. They have dorsal spines with hypodermic needles. If something tries to attack from above, or if something steps on them, it will encounter these spines. Sharp enough to puncture human skin, and deadly enough to kill an adult human these spines are terrifying! The venom is cytolytic, meaning when it is injected into the blood stream it explodes cells and basically dissolves from the inside out. As a master of camouflage, they will hide perfectly still in coral or a rocky reef, sitting and waiting for a meal to swim by. Once a small fish swims too close they ambush! Sucking the prey in and swallowing it whole. Quite terrifying…but tis the season! 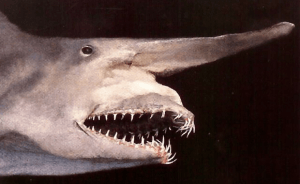 Lastly, we have the absolutely adorable goblin shark! This Chondrichthyes (cartilagenous fish) lives in deep water, usually 130 to 4000 ft deep. They are purplish grey in color with bright blue around the edges of their fin. Unlike other sharks, goblin sharks do not have a protective eyelid. They average about five ft long, but the larges recorded was over twelve feet long! Their distinguishing extended snout is covered in pores called Ampullae of Lorenzini. These are filled with electroreceptive jelly, which allows sharks to decide pulses in the water, or under the sand, up to about one meter away from them. Goblin sharks are capable of extending their unhinged jaw out as far as their snout to eat organisms such as small bony fish, squid, and crustaceans.

How Do We Make Marine Biology Camp Fun for Teenagers?

The Importance of Outdoor Adventure and Summer Camps